Update 1: Mobilized posted some more details of the interview with Steve Jobs. Here’s the relevant info regarding this upcoming ‘traffic service’:

Is traffic the only thing you are using that collective data for, or do you have other plans?

Jobs: We mention the traffic service and I think that is all we are going to mention at this point in time before we have something to announce.

But you are not saying that is the only thing you might use it for?

Jobs: We are building a crowdsourced database based on traffic and that is what we are saying.

Something related to a traffic service is coming soon. Exciting!

In this morning’s Apple press release on addressing the iOS location tracking issue, one particular question has hinted that Apple is planning a traffic service for iPhone users. Could we see a native turn by turn GPS coming soon from Cupertino? Read the following and let me know what you think:

Android users already have built in turn by turn GPS courtesy of Google. iPhone users are still patiently waiting for theirs! Actually, there is one already. It’s called Navfree GPS Canada. Click here to download it! 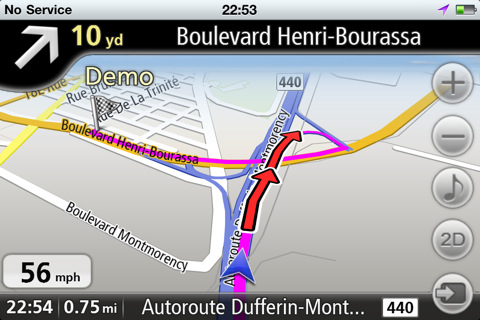