Reuters reports Apple continues to add to its growing team of automated vehicle engineers, with the most recent hire coming from Tesla:

A LinkedIn profile for Jamie Carlson shows that he has left Tesla and moved to Apple. At least six others with experience developing self-driving technology and systems have joined Apple, according to their LinkedIn profiles. 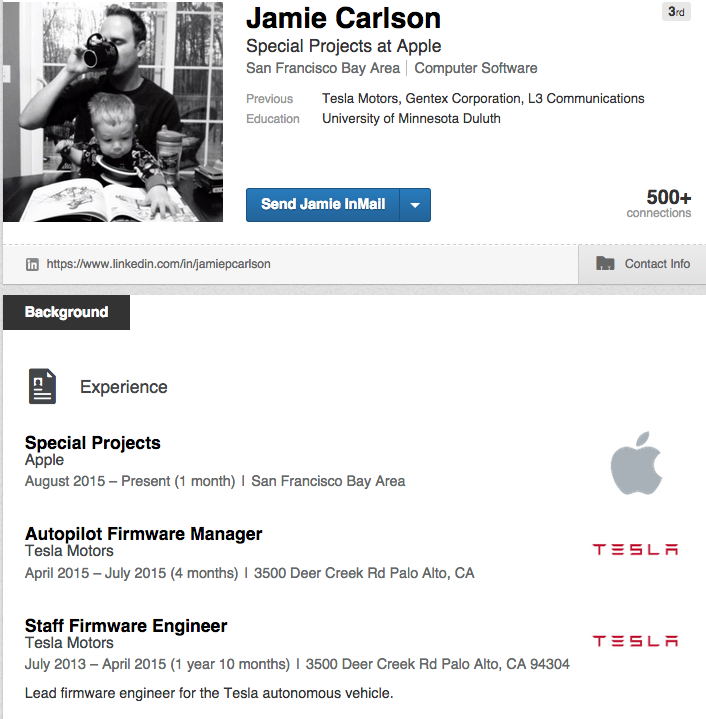 Looking at Carlson’s updated LinkedIn page below, he joined Apple in August and is currently working on “Special Projects”. Previously, he worked for just over two years at Tesla, in charge of the company’s autonomous vehicle project.

Earlier this year, the WSJ said Apple has a secret group called ‘Project Titan’ working on an electric vehicle, which could make its release as early as 2020, according to sources speaking with Bloomberg.

Last week it was reported by The Guardian Apple had been scouting test locations for a rumoured self-driving car project and news of Carlson’s hire adds speculation an autonomous vehicle could be in the works. Start saving up those dollars in your piggy bank, folks!