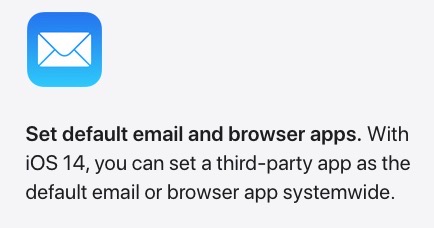 Apple today announced a plethora of new changes in iOS 14 and iPadOS 14, but the company quietly let one of its biggest features slip under the radar: the ability to set new default apps for email and browser.

For the longest time, iPhone and iPad users were unable to change from Mail and Safari as systemwide defaults. But if you’re not down with Apple’s Mail (especially if you’re a hardcore Gmail user) and Safari, you can now change them when iOS 14 is released for the masses this fall.

This means if you’re a Google user, you can now have Gmail (or anything else like Spark) as your default email app and Chrome as your browser.

Of course, Apple didn’t mention this on stage as it most likely wants users to use its own Safari and Mail apps by default.