According to analyst Gene Munster from Piper Jaffray, he believes Apple will become the world’s first trillion dollar company in market cap by the time 2014 rolls around. How will Apple achieve this? Munster believes Apple’s growth will derive from taking profit and market share away from existing tech companies:

First, we believe dollars invested in US technology companies will increase ~5% y/y on average for the next three years (CY12-CY14). By comparison, dollars invested in US tech companies were up 9% y/y in 2011. Therefore, the tech sector will add ~$390 billion in market cap through 2014. We assume Apple could capture half of this market cap (from 85% in the 4 years prior).

Second, the companies we consider to be the 10 most relevant competitors to Apple (Samsung, HTC, RIMM, NOK, SNE, DELL, HP, MSFT, INTC, GOOG) represent nearly $1 trillion in market cap today. We believe 20% of that value, or ~$200 billion could shift to Apple through 2014. Thus there is potential for Apple to repeat history and add another $400 billion to its market cap. At a $1,000 share price (roughly $1 trillion in market cap) Apple would represent 26% of the total US tech market cap from 17% today.

A resulting $1 trillion dollar valuation would result at a predicted stock price of $1000 US per share. Apple’s competitors as listed in the chart below had their market cap decrease by over $400 billion over the past four years, meanwhile Apple’s cap increased by just over $390 billion. 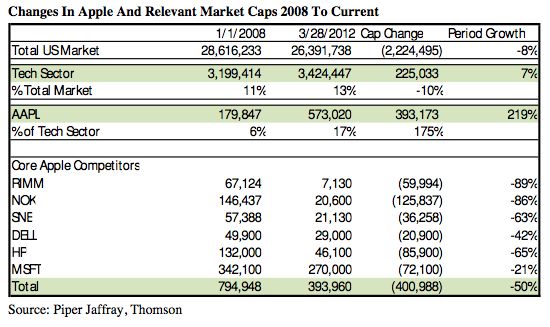 Earlier today, Apple also announced its date for their 2012 Q2 earnings call on April 24th at 2pm PST/5pm EST. Apple previously announced a $46 billion dollar Q1 quarter in terms of revenue, and 33 million iPhones sold. Expect to hear numbers about sales of the new iPad too.

[caption id="attachment_389490" align="aligncenter" width="1400"] Image: Marcus Kane[/caption] As we count down the months to the launch of Apple's long-rumoured mixed-reality headset and, with it, an entirely new product category for the tech giant, we're starting to see more leaks and concept designs pop up. The latest concept renders of Apple's "Reality Pro" AR/VR headset imagine...
Nehal Malik
46 mins ago