A new Apple patent application published today by the U.S. Patent and Trademark Office (USPTO) details a method by which personalized albums can be created, purchased and gifted from a cloud-based music service. According to AppleInsider, the patent application titled “Digital Mixed Tapes” may actually revive the mixtape with a digital twist, in an era where on-demand streaming puts massive music libraries at your fingertips. 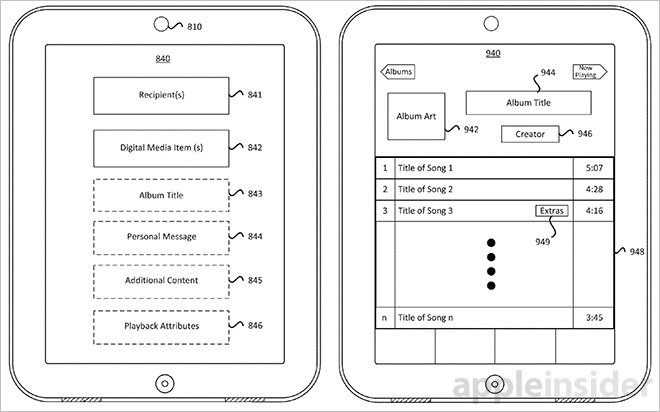 Apple notes that the system’s mechanics are based on existing digital storefront technology. Users can simply select the songs, movies, images and other digital media from their own library or an online store, then arrange the content, playback options and more to suit their needs. They can also apply “highly specific personalization attributes to a gifted album”. Furthermore, gift givers can even restrict a recipient’s ability to fast forward or skip songs, for a more personalized listening experience.

“Mixing in multimedia like photos or iBooks adds another layer of personalization options. Here, users can choose to display an image or series of images set to a backing track, akin to a custom slideshow.

On the receiving end, the store sends out an email or push notification to alert a user that they have a digital mixed tape waiting, presenting options to accept or reject the album. A gift giver is charged when a recipient accepts, but gets their money back if the album is rejected”.

Apple’s digital mixtape patent application was first filed for in April this year.