Apple to Crack Down On Keyword Stuffing in App Titles

New data from TUNE reveals that Apple may have been busy lately cracking down on “keyword stuffing” in titles, reports TechCrunch.

Earlier this month, users noticed changes in the App Store algorithm that have impacted iPad app developers and resulted in changed rankings for some apps. The data from TUNE, a mobile marketing firm that developed an App Store algorithm tracker, Sonar, shows changes in ranking as early as July 8 and TUNE says the trend continues even today.

“In recent months, we’ve heard Apple will begin taking a stricter approach to App titles,” the company told us. “This is likely in response to the abuse of ‘keyword stuffing’ in titles.”

What this means is that developers of apps with longer titles who aim to describe their apps in order to rank higher in searches, have reason to worry, because Apple has begun cracking down on this practice. Apple even contacted some developers to inform them that apps with long names could cause issues and recommended that they re-submit their apps with an updated title that doesn’t exceed 64 characters.

As the charts provided by TUNE and inserted below show, the algorithm change has heavily impacted the top chart rankings. Notice how TuneIn Radio has dropped from 4th place to 13th, and how Shazam has moved up. 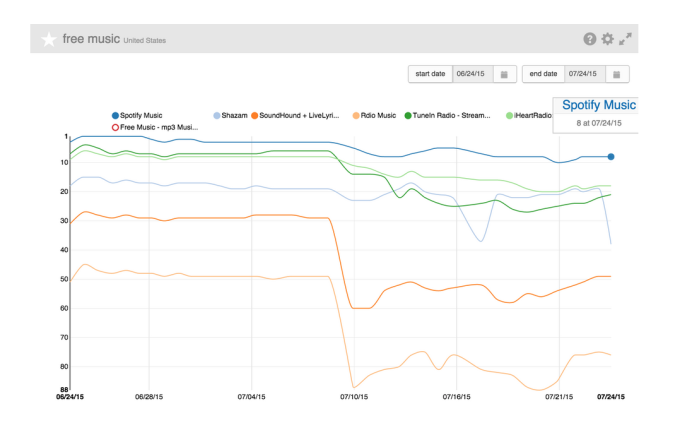 But cracking down on lengthy titles seems to be just one of the moves Apple is making to make app discovery easier and more effective.

“While narrowing down the specific change may be very difficult, we believe this signals a trend that Apple is moving toward a more sophisticated approach when it comes to search,” says TUNE. “In the future, they could incorporate and weigh ranking factors like engagement, uninstalls, install/uninstall ratio, and ratings/reviews more heavily, and not focus so much on download and download velocity,” the firm added.