Apple mentioned that iOS 4.2 is coming in November. Developers have had access to 4.2 Gold Master already, so it’s only a matter of time for the official release to hit iTunes. Speculation is that it should drop today and if a recent email Apple sent to developers is any indication, we can taste iOS 4.2 soon.

iOS 4.2 will soon be in the hands of millions of customers around the world. Make sure that your iPad, iPhone, and iPod touch apps incorporate all the exciting features in iOS 4.2, including:

Game Center – With the Game Kit API, you can implement Game Center functionality such as submitting and displaying achievements, scores, and leaderboards, and establishing multiplayer games.

Submit Your Apps Today
Build, test, compile, and submit your apps for review using iOS 4.2 SDK GM seed so they can be ready when iOS 4.2 is available to users around the world.

Apple emphasized three core features of iOS 4.2: Multitasking, Game Center, and AirPrint. I’m looking forward to AirPlay and Apple TV. Get ready for iOS 4.2 to drop any time now. Are you excited yet? 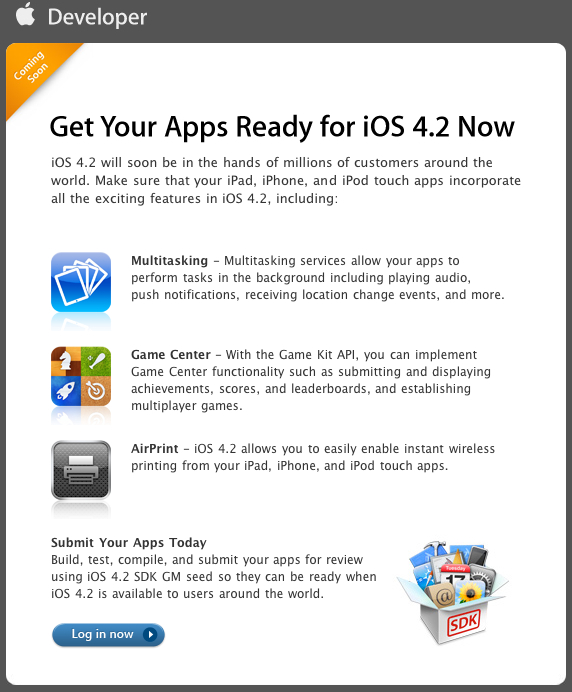