A new Apple patent application published today by the U.S. Patent and Trademark Office (USPTO) details a method by which portable devices like iPhones can expel water from cavities like the speaker and microphone using varied electric charges and acoustics, AppleInsider is reporting. The patent titled “Liquid expulsion from an orifice” describes how hydrophobic properties can be added to conductive elements disposed within a speaker or a microphone chamber, by varying their respective surface charges. 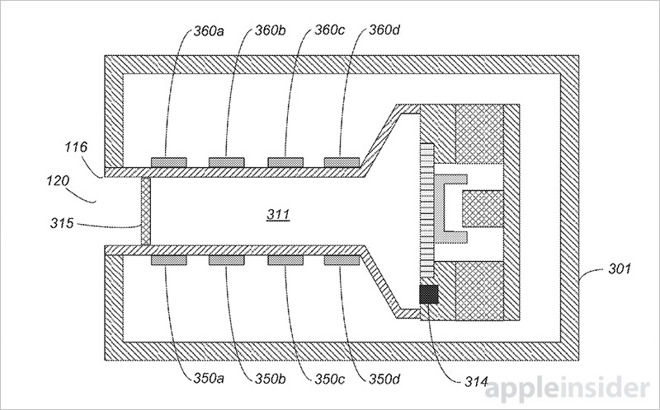 Apple explains that by switching a conductive element’s surface charge between positive, neutral and negative modifies that particular region’s hydrophobicity, meaning an electrode can be configured to attract or repel liquid. For example, a positive charge might reduce an area’s hydrophobic properties, while a negative surface charge has the opposite effect and pushes liquid away.

“Selectively applying varying surface charges to particular regions allows the system to facilitate movement of a collected liquid, or more specifically transport water toward and out of an exit port. A separate surface charge might also be applied to the protective mesh screen to speed up the process. Finally, Apple says speaker drivers might also assist in liquid evacuation. By outputting energy pulses, or sound waves, that propagate through the acoustic channel, a speaker can push out standing fluid by force”.

Apple’s liquid expulsion patent application was first filed for in May 2014.