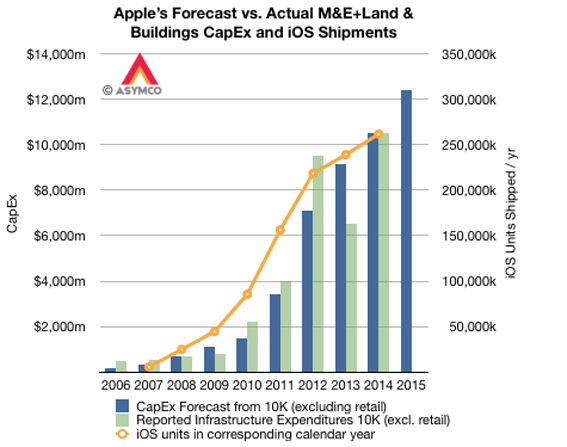 According to the latest forecast by Asymco’s Horace Dediu, Apple is set to ship record 310 million iPhones, iPads and iPod touch devices during 2015, a figure that is 25% higher as compared to iOS device shipments during the previous year. Last year, he had predicted that Apple in 2014 would ship between 250 million and 285 million iOS devices, with actual shipments turning out to be 247 million according to Apple’s figures.

“In humans, live births tend to follow nine months after conception. The gestation period of an iOS device is closer to that of a whale or rhinoceros: new model Macs, iPads and iPhones tend to arrive 12 to 15 months after a bump in capital expenditures (plants, equipment, etc.).”

For 2015, Horace Dediu used this year’s anticipated Cap Ex spending of $12.4 billion, not counting retail, to predict next year’s iOS shipments. The result is 310 million iOS devices, give or take a few million Apple Watches. That’s up 25% from 250 million in 2014.

You can read Asymco’s full report in detail at this link.

Fresh off the heels of the launch of Apple's HomePod (2nd-Gen), TF International Securities' Apple analyst Ming-Chi Kuo believes a successor to the HomePod mini 2 could be on its way. In a tweet thread surrounding Apple supplier Goertek, Kuo discussed that the Weifang-based components company has "secured NPI and assembly orders" for the ‌HomePod mini‌...
Steve Vegvari
54 mins ago