Apple was officially declared as the leading smartphone manufacture in the world back in July. Today another report by DigiTimes claims Apple will also become the largest smarphones vendor in terms of shipment volume, overtaking the collective sales of all Nokia smartphones in the year 2011. Digitimes research states that by the end of 2011, Apple will have sold approximately 86.4 Million iPhone handsets, a number even higher than the best sales figures of Nokia smartphones. Meanwhile, Chinese manufacturer Huawei Technologies‘ sales will also rise, closing its gap with Sony and Motorola. 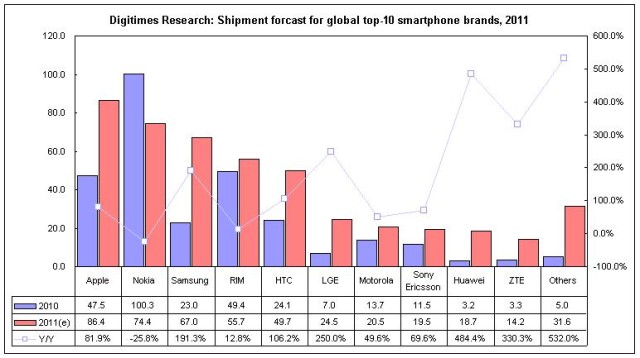 Huawei and ZTE will be two rising stars in the global smartphone market in 2011. Huawei, in particular, is expected to enjoy an over 400% rise in shipments.

Following Nokia and Apple, Samsung Electronics has been declared as the third largest smartphone brand, which is also expected to enjoy the highest shipment growth in 2011 with a projected sale of about 67 Million smartphone units worldwide. According to the same research, the total number of smartphone shipments from world’s top-5 smartphone brands will exceed 333 Million units by the end of this year. Wow!