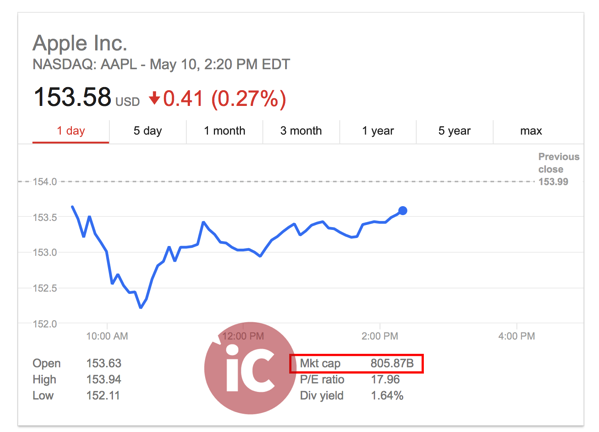 Just over two years ago, Apple crossed the $700 billion market capitalisation threshold and today, the iPhone maker has become the first U.S. company to surpass the $800 billion mark, Reuters reports. Currently trading at US $153.58 per share with a market capital of $805.87 billion, Apple’s stock (AAPL) has grown 33% this year and almost 50% since the U.S. election in November.

“It’s just reflective of how powerful a franchise it is. It may be the most powerful franchise in the country today,” said Rick Meckler, president of LibertyView Capital Management in Jersey City, New Jersey, whose firm does not own the stock.

“Considering that it has a limited number of products, it has really dominated that market in a way that few companies have, and it’s been able to retain margins despite lots of competitors.”

The median price target on Apple is $160, up from the $140 median three months ago. The current market cap of $805.87 billion is larger than the economies of 45 of the 50 U.S. states, topped only by Illinois, Florida, New York, Texas and California. If Apple continues on its growth path, the company will top the $1 trillion market cap level later this year.