According to the American Customer Satisfaction Index’s (ACSI) 2014 PC consumer satisfaction ratings, Apple has secured the top spot for 11th consecutive year, AppleInsider is reporting. Apple’s aggregate score of 84 was enough to maintain a two-point lead over a group of smaller companies including Samsung, Lenovo, and Asus, which combined to score 82 points. 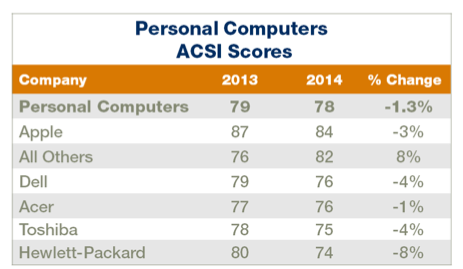 Texas-based tech giant Dell came in at number 3 scoring 76 points, down from 79 points one year ago . Acer, Toshiba, and beleaguered Hewlett-Packard round out the top five spots. It is interesting to note that consumers have shown an increased interest in desktop computers this year. “Satisfaction with those wall-bound machines ticked up by 3 percent year-over-year”, as compared to decrease of 4% and 1% for laptops and tablets respectively.

The ACSI surveys some 70,000 consumers each year, benchmarking satisfaction with their most-used products and services.