According to BrandZ 2011 rankings, Apple has topped Google in the Global Top 100 to become the world’s leading brand. Google previously held the title for four years, but with the success of the iPhone and iPad, Apple has grabbed the distinguished title.

Apple’s brand value is worth $153 billion, an increase of 84% compared to last year, whereas Google declined 2% in value to sit at $111 billion, with IBM close behind in third at a value of $100 billion.

Peter Walshe, the director of Millward Brown behind the 6th annual BrandZ study had this to say on Apple’s surge:

“Apple is breaking the rules in terms of its pricing model…It’s doing what luxury brands do, where the higher price the brand is, the more it seems to underpin and reinforce the desire…Obviously, it has to be allied to great products and a great experience, and Apple has nurtured that.”

It’s no surprise that 2010-2011 is becoming the year of Apple. Their market cap has grown from $60 billion to over $323 billion in just five years. The company has also accumulated a staggering cash war chest of $65 billion, and the company doesn’t appear to be letting up anytime soon, as we can expect some new announcements about iOS 5 at the upcoming 2011 WWDC.

Other huge movers include Facebook rising 246%, and Blackberry falling 20% (not surprising here). 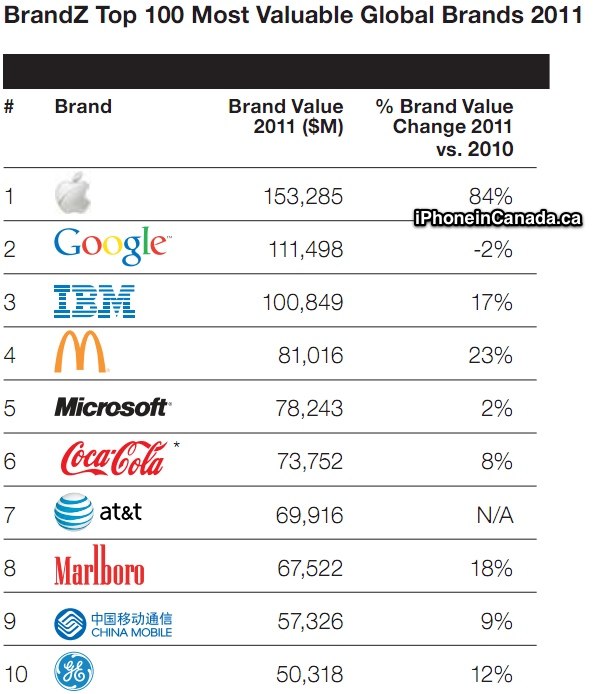 You can check out the full Top 100 chart here.