Apple Continues to Tower Over Other Tech Companies in Quarterly Revenues

A bar-chart of the latest quarterly financial results shows how Apple is continuing to tower over other tech companies, leading in both turnover and profits, while other companies are changing places. ZDNet points out that IBM, a company that used to rule the IT world, no longer dwarfs other tech companies. In fact, it has now fallen behind Google and Microsoft, and it is nowhere near as profitable. The company’s role has now been taken over by Apple. 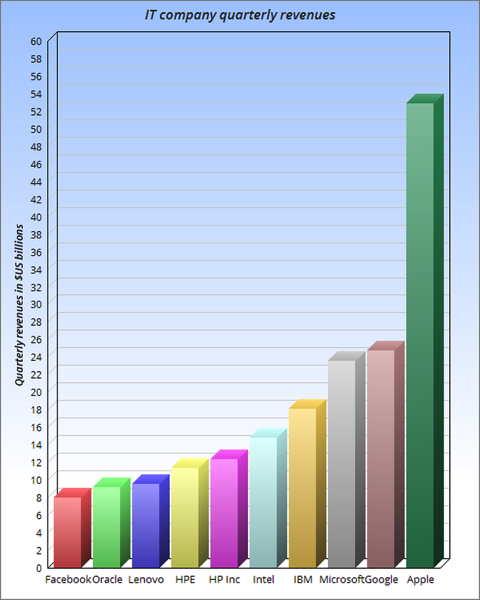 Jack Schofield, who put together the above bar chart, explains that Google’s advance is the most notable difference compared to his quarterly revenue findings of leading IT companies from last year, though Facebook has also done well. And even though Apple’s turnover appears to have slumped dramatically, but this isn’t the case. “Apple’s results are seasonal and the numbers in the previous bar charts were for a different quarter”, he says.

I’ve dropped Yahoo, which is now irrelevant, and replaced it with Oracle. Second, HP now appears as two companies instead of one. The old HP has been split into HP Inc, which includes PCs and printers, and HP Enterprise, which includes the serious IT products and services. The original idea was that the PC business was holding back the share price of the enterprise part of HP.

The next time I do this, I’ll include Dell Technologies which, following the merger with EMC, is currently a company in transition.

Reporting some success in its PC business, Dell has now regained its No. 1 worldwide server unit share position.