Asymco analyst Horce Dediu believes that Apple will finally cross the $1 trillion revenue mark this year, generated by the combined revenue from iOS product sales and the company’s services sector, including apps, subscriptions, and media. He also adds that the iPhone will have sold at least 1.2 billion units in its first 10 years, making it the ‘most successful product of all-time’. 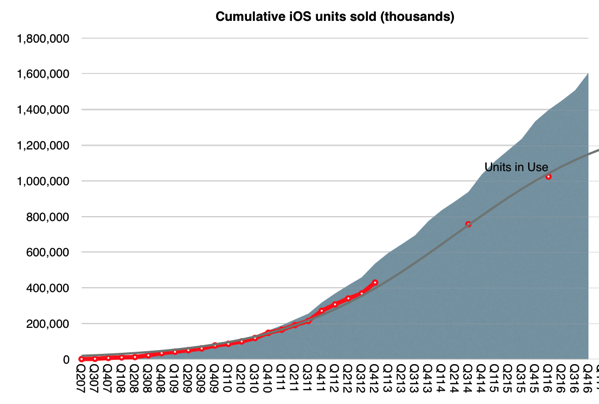 Dediu predicts that Apple’s overall revenue from iOS product sales will reach $980 billion by mid-2017, with the combined total unit sales of iOS products other than the iPhone, i.e. the iPad, iPod Touch, Apple Watch, and Apple TV, will escalate to 1.75 billion. The total sales of all iOS devices is likely to top 2 billion units by the end of 2018. In addition to hardware, Dediu explains that Apple has also brought in more than $100 billion in terms of sales from its services sector.

The revenue numbers can only hint at the change in behavior among users. An iPhone is unlocked 80 times a day. Assuming 600 million devices in use there are 48 billion sessions on iPhones every day. 17.5 trillion sessions every year. It is these instances of interaction and engagement which are desired by all businesses built on top of the ecosystem.

These instances of engagement must be multiplied by the quality of the customers which Apple captures. iOS users spend more and are more loyal than those on alternative platform thus qualifying the platform as “premium” and thus adding to its value in the eyes of developers, content producers and service providers.

The analysts also claims that more users will switch from Android to iPhone and not the other way, the reasons for which have “more to do with the ecosystem and quality of users”, rather than with the hardware.

Last night, The Game Awards 2022 was held both virtually and in front of a live audience of industry personnel. The night was dedicated to recognizing the games and studios that helped shape the past 12 months.  Host Geoff Keighley worked with a number of publishers and development teams to pack the award show with...
Steve Vegvari
56 mins ago