The iOS 11 GM leak has revealed the upcoming Apple TV 4K will feature a three-core A10X Fusion CPU, along with 3GB of RAM, up from the previous A8 and 2GB of RAM in the current Apple TV 4.

Now, we’re hearing this 4K Apple TV model will include possibly a new remote—capable of haptic feedback, according to Guilherme Rambo, who has been diving deep into the iOS 11 GM. 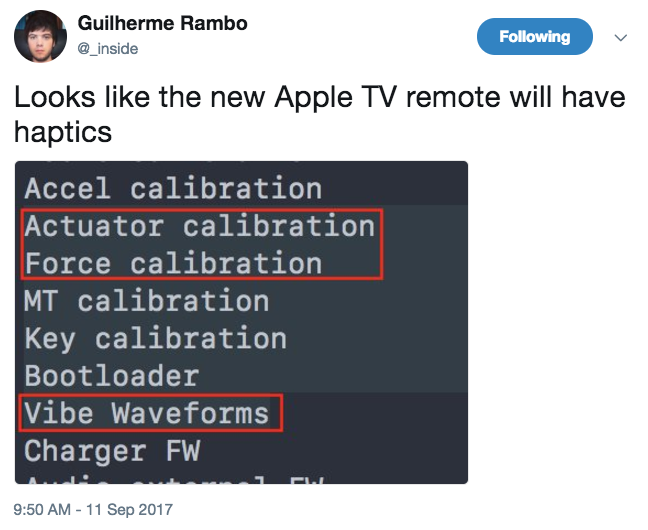 According to 9to5Mac, Apple’s existing Siri Remote is backordered 2-3 weeks on Apple.com (and in Canada), suggesting a new model may be announced soon.

Apple TV 4K is also said to support HDR (high dynamic range) and Dolby Vision. No word on how much this new model will cost, but our guess is it may cost more than the existing Apple TV 4 model.

We’ll find out all the details tomorrow at the company’s special event at the Steve Jobs Theater at Apple Park.

As reported by 9to5Google, Google’s new wired Nest Doorbell which appeared in the Google Home app last month has been leaked early in stores with availability expected later this week. The new Nest Doorbell was spotted in a Best Buy store, with the packaging saying “2nd generation” and “Wired” with a check mark, in white and dark...
Usman Qureshi
2 mins ago

As the volume of trips to and from post-secondary campuses across Canada is doubling, Uber is sharing some back-to-school trends highlighting how students are relying on ridesharing to get around on and off campus. "Now that classes are back in full swing, it’s a great time to remind students how to use Uber app features...
Usman Qureshi
29 mins ago