According to an analysis of Apple TV+’s opening weekend by Parrot Analytics, the initial demand for the premier content offered by Apple’s new video streaming service has been ‘fairly modest,’ with most shows falling short of the demand seen for some streaming titles launched by Netflix and others in 2019 (via iMore). 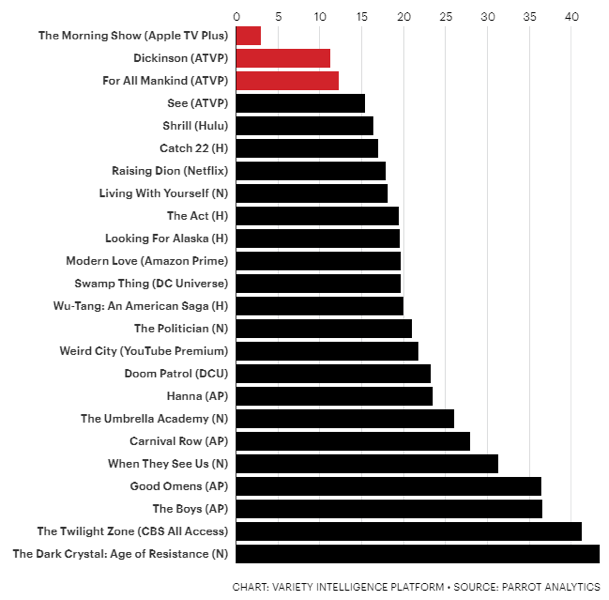 ‘See’ was the only Apple TV+ show that broke the Top 20 most demanded shows in 2019, while ‘The Morning Show,’ ‘Dickinson,’ and ‘For All Mankind’ all performed poorly.

Although The Morning Show was most highly touted by Apple, it appears that a star-studded lineup featuring Jennifer Aniston, Reese Witherspoon, and Steve Carell was not enough to overcome initial reviews and reports of very poor dialogue:

“What is perhaps more interesting is how Apple TV+ shows performed against each other. Nearly all of the reviews pre-release put For All Mankind ahead of every other show TV+ has to offer. Despite this See’s demand came in well ahead of the space-race epic. The loser of the bunch definitely seems to be The Morning Show, with demand well behind even Dickinson, starring Hailee Steinfeld.”

Meanwhile, on Rotten Tomatoes, user ratings for all of Apple’s flagship shows are showing a vast improvement on the initial offerings from critics, with even The Morning Show reported to be much improved in episode three.

Meta is finally making digital collectibles available to everyone on Instagram in Canada, by enabling them to share and display their NFTs on the social media platform. Web3 technologies like blockchain and tokens like NFTs are an important aspect of the economic and community-building potential of the metaverse. Meta says enabling NFTs on its platforms...
Usman Qureshi
20 mins ago

In partnership with the Orange Shirt Society, Meta has announced the launch of a new AR effect on Instagram titled “Orange Shirt Day” to raise awareness about the impact of the residential school system. The effect, developed in collaboration with the National Centre for Truth and Reconciliation (NCTR), is inspired by the experience of residential school...
Usman Qureshi
44 mins ago

Apple has removed The OG App, an ad-free and suggestion-free Instagram client created by a startup called Unf1feed, from the App Store — reports TechCrunch. The iPhone maker explained in a statement to TechCrunch that The OG App was removed earlier this week for violating Instagram owner Meta's terms of use for the service, which in...
Nehal Malik
45 mins ago