It’s not exactly clear when, but Apple has quietly updated its technical specifications for the iPhone 6, iPhone 6 Plus, and iPad Air 2. What makes this update particularly interesting is that the aforementioned devices – and the recently released iPhone 6s and 6s Plus – now support Bluetooth 4.2 (via 9to5Mac). 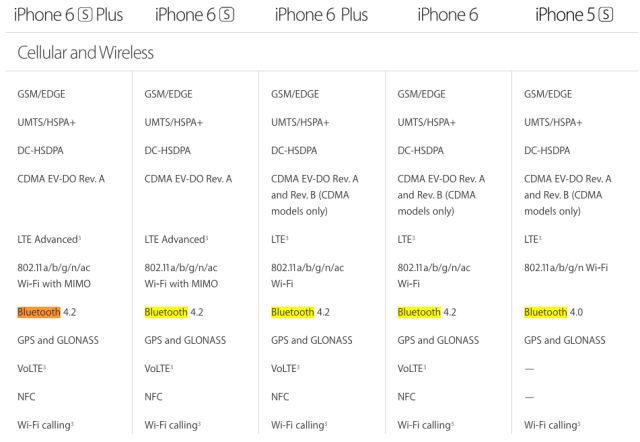 Bluetooth 4.2 brings up to 2.5× faster speeds and up to 10× greater data capacity compared to Bluetooth 4.0, alongside privacy, security, and power consumption enhancements.

What isn’t exactly clear is how the technical specifications on the devices have changed. According to earlier reports, the increased speed and packet size features will require a hardware update. While it is possible for a manufacturer to update older hardware to Bluetooth 4.2, not all Bluetooth 4.2 features will be available, a representative for the Bluetooth SIG told Ars Technica.

“Privacy features may be available via firmware update, but it does ultimately depend on the manufacturer implementation,” a representative for the Bluetooth SIG told Ars.

Overall, it seems as though Apple’s iOS 9 has enabled Bluetooth 4.2 for the iPhone 6, 6 Plus, and iPad Air 2, as the hardware allowed it, but it is an open question which features are included, since the older hardware isn’t able to take full advantage of the newer spec.