Along with the Apple TV and iTunes 9.0.2 updates, Apple has also updated their free iPhone/iPod Touch Remote app to version 1.3.2. The update focuses almost exclusively on Apple TV:

The Apple Remote app allows users to control the music on their computer or Apple TV simply using their iPhone or iPod Touch. The remote lets users see album artwork on the device, create and update Genius playlists, edit playlists in iTunes and more. 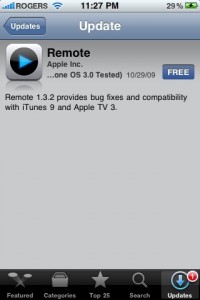