After over a year without seeing any updates for the Remote App, which allowed you to use your iPhone or iPod touch to control your iTunes or Apple TV, Apple has finally updated it. It felt as though this app had been long forgotten by Apple, as they even noted that the developer who had been working on it had moved on to other projects (interesting side note, I discovered that the other project was that the developer had become an instructor for the iPhone development class at Stanford University and can be found on iTunes U).

The iPhone interface is clean and easy to use.

Anyways, those fears are gone now as Apple has updated the app for iOS 4, iPad, and has added some new features. Â One of the features not listed is that the app now works with iOS 4 multitasking, which makes it great to have running in the background.

Apple lists the new features as:

This will make connecting your Apple TV with content on your computer very seamless and easy to use. Â The new iPad interface is also very intuitive and takes full advantage of the added screen real estate. Â Currently you can only connect to Airplay speakers, but I imagine once the Apple TV is out (or once it arrives for you lucky early adopters), there will be no problems connecting to it. Â As well, I am quite pleased that they have added a new icon to support the Retina Display. Â I know I’m not the only one out there that gets annoyed when they see a blurry icon on their beautiful iPhone home screen. 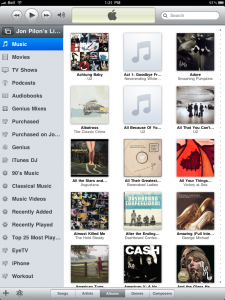 The large iPad interface makes it easy to browse your library.

I am also hoping that with the release of iOS 4.2, the remote app will make it possible to stream content straight from your computer to any iOS device, and not just the Apple TV, but that’s just a hope.

Using the app is very straightforward. Â You pair your device to your computer, then simply select which songs you want to play, and if you have any, over which Airplay speakers you want. Â I actually find the interface on the iPad version of this better than using iTunes itself, so I may be using this app more often than before just to do simple song changes. Â I can’t wait to get an Apple TV in order to test out this app with it and enjoy a little more iOS integration in my living room.

So download and enjoy the new, and cleaner looking Remote app. Â You’ll be happy you did. Â And don’t forget, you can find me at www.allthattechstuff.com or @jonpilon on Twitter