Apple remained the No. 1 smartphone manufacturer in the US with 42.6% of market share during the three months ending in March, reports comScore based on data from MobiLens and Mobile Metrix.

As of the end of the first calendar quarter, 187.5 million people in the US owned a smartphone, which represents 77% of mobile market penetration, up 3% compared to the December quarter. Apple remained the most popular brand of choice among Americans, with 42.6% of market share. 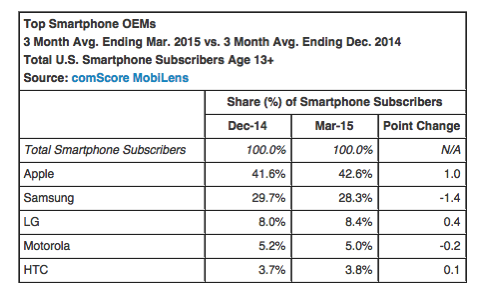 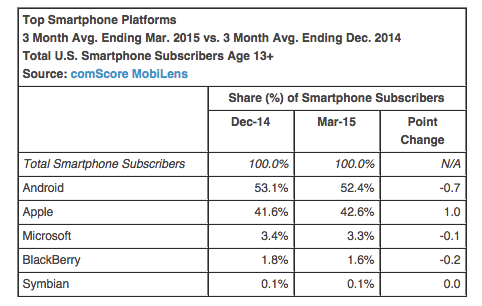 Other smartphone operating systems have only a fraction of the lucrative US market: Microsoft grabbed 3.3%, BlackBerry had 1.8% (down 0.2%), and Symbian only accounted for 0.1% of the total market.

Among smartphone mobile media users aged 18 or above, Facebook was the most used app (69.5%), the comScore Mobile Metrix reveals. YouTube came in second with 55.9%, and Google Play ranked third with 51.5%. Interestingly, Apple Maps was the tenth-most popular app (24.8%), followed by iTunes Radio and iCloud with 23.9%.