Apple, Wal-Mart Assisting China in Cracking Down on Water Polluters

According to a report by Bloomberg, US companies like Apple and Wal-Mart are helping China crack down on water polluting factories, by banishing them from their supplier list. Environmental activists like Ma Jun believes the process is more effective in making polluting factories clean up their act than starting protests or lobbying local governments and imposing fines. 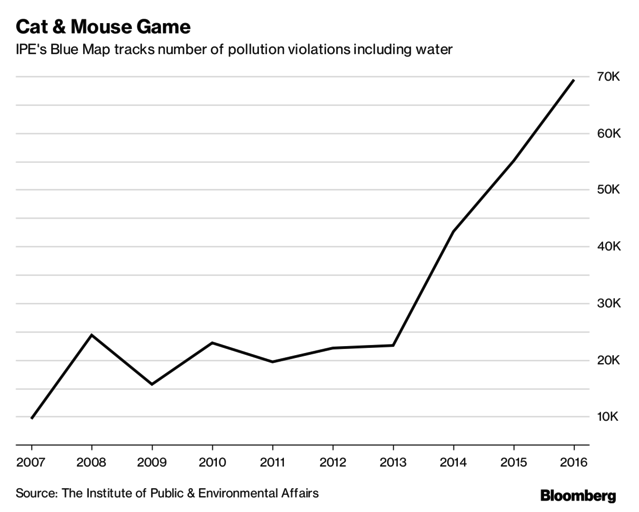 Backed by Alibaba Group, Ma’s strategy is to scrape real-time data off government websites that compile readings from effluent monitoring equipment at over 13,000 of the worst water polluters, and then aggregate that data is on an app called Blue Map. The app aims to help solve one of the government’s biggest headaches i.e. the growing scarcity of clean water for its crops, industries and cities.

The database, which is updated every two hours, is becoming an important reference for US companies sourcing from China, including the likes of Apple and Wal-Mart.

Ma, author of the influential 1999 book “China’s Water Crisis,” said his database, which anyone can access and use for free, has identified more than 830,000 cases where factories were either pumping excessive quantities of waste or falsifying data by tampering with monitoring devices.

“Sometimes it’s hard to get local government agencies to enforce or fine these factories because they are huge sources of tax income,” said Ma, founder of the Institute of Public & Environmental Affairs (IPE) in Beijing. “It’s much more effective when these companies face the threat of being kicked off Apple’s supplier list. Economic interest matters.”

Ma’s database is also saving US companies the cost of having to individually screen suppliers and prioritize which factories could damage their reputation.