Apple was the World’s Largest Semiconductor Customer in 2011

Within the top 10 rankings, three companies were from the Americas, three from Asia/Pacific, three from Japan and one from Europe, the Middle East and Africa (EMEA). Apple led the market in 2011 (see Table 1), achieving significant growth, as it has done for the past five years. As a result, Apple became the biggest customer of semiconductor chip vendors in 2011, climbing two places in the ranking, from third in 2010.

Apple gained a much greater share of the smartphone market, and its media tablet business was also highly successful in 2011. While DRAM prices fell drastically in 2011, and many PC vendors decreased their total semiconductor demand accordingly, the success of the MacBook Air enabled Apple to increase semiconductor chip demand even in its PC business. 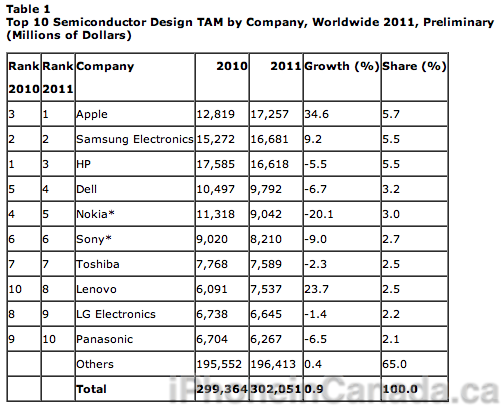 It was reported earlier that Apple’s A5 dual core processor that powers the iPhone 4S and iPad 2 is currently manufactured in Austin, Texas. Later today Apple is set to announce its 2012 Q1 earnings, set to be one of the biggest holiday quarters ever.