The U.S. Patent and Trademark Office (USPTO) has today published a couple of patent applications from Apple, which reveal a future Apple Watch band having embedded haptic actuators, and a possible new wearable device beyond Apple Watch that could be in the works that has the capability of recording electrocardiographic (ECG) signals, PatentlyApple is reporting.

The first patent filing details that a processing device can be included in the electronic device that transmits activation signals to the haptic actuator or actuators. Each haptic actuator can produce a selected force such as pressure, motion, and/or vibratory response into a surface of the band, thereby providing tactile stimulation to the skin of the person wearing the band. Haptic stimulation can also act as notifications for one or more events, such as the receipt of an email, a text message or a low power state. 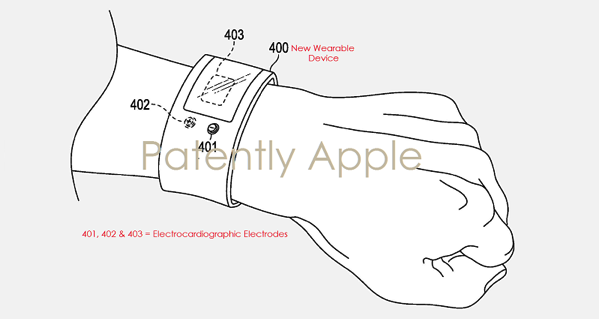 Apple’s second patent filing made public today reveals a new health wearable device that is capable of not only recording ECG signals, but also detecting and correcting for inversions in ECG measurements caused by wearing the device on varying locations on the human body. Apple notes that the device can be affixed to a limb of the human body such as a wrist or ankle. Since ECG measurements can depend on the electrode’s relative position to the heart being measured, changing the device’s location from right to left can have an impact on the acquired measurements.

Apple invention relates to a wearable device that can determine the wearing limb of the device, and if the device is being worn in such a way as to produce inverted electrocardiographic readings. It can then correct the inverted readings in order to produce electrocardiographic measurements that are consistent for a given pair of limbs of the user.

Both patent applications were filed by Apple earlier this year.