In an effort to assist the initial customers of Apple Watch, Apple will be hosting ‘Apple Watch Basics’ workshops at some of its retail stores around the world, starting from April 24. As pointed out by MacRumors, Apple has listed classes as an available option on April 24 on individual retail store websites and in the “Stores” section of the Apple Store app. 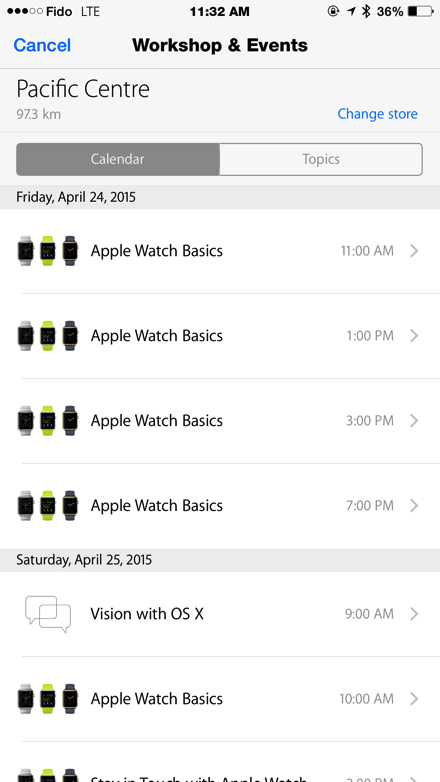 While not all retail locations are displaying Apple Watch workshop availability at the moment, a number of stores in the United States, Canada and in other countries are however offering workshops. In Canada, the Pacific Centre (retail store in Vancouver) is listing workshop classes at 2 to 3 hour intervals, starting from Friday April 24, the day Apple Watch pre-orders will officially start arriving.

Workshops take place at 1.5 hour intervals all day long in most locations and are also available on Saturday and Sunday. It appears that some locations may also be offering extended hours to allow more time for hosting workshops.

Customers who are interested in attending one of these workshops to learn more about the Apple Watch can schedule an appointment beginning today in a store where the appointments are listed.

It must be noted that some stores are also showing additional Apple Watch classes beyond the introductory basics class titled “Stay in Touch with Apple Watch”, which are being offered at select retail store locations.