Despite a much weaker demand for the iPhones, the Apple Watch shipments grew an impressive 49% year-on-year (YoY) in Q1 2019. According to the latest research from Counterpoint’s Global Smartwatch Tracker, one in three smartwatches sold during the first quarter was an Apple Watch, which played a massive role in smartwatch shipments worldwide. 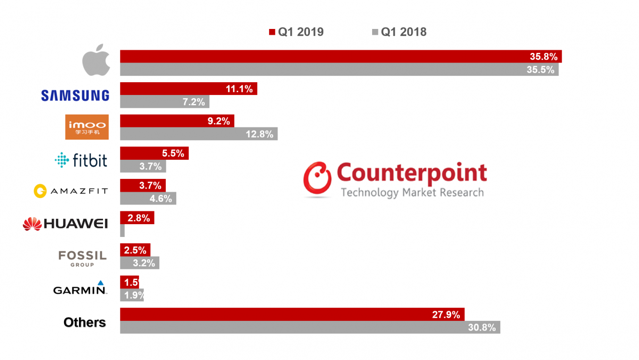 Counterpoint analyst Satyajit Sinha pointed out that the ECG capability in the Apple Watch is its most desirable feature, which has now been approved in a total of 20 countries including France, Germany, Italy, Spain, and the UK:

“The heart rate sensor for health monitoring, GPS and pedometer sensors for fitness, and NFC embedded for payment are some of the key integrated technologies. Related use-cases and in addition to notifications with cellular capability are driving the smartwatch adoption. However, limited battery life remains a pain point for consumer’s decision-making process, irrespective of region and price band.”

You can get more information regarding the research here.