Apple Watch Will Become Most Profitable Product Line Ever with 60% Margins: Analyst

As Apple hasn’t published official Apple Watch pre-order numbers, it unleashed a flood of speculation and estimates about how many were sold on the first day of availability, April 10, and how many will be sold in the first two weeks. The latest in line is Think Big Analytics principal Carl Howe, who estimates 3 million units and which will generate roughly $2 billion in revenue for Apple (via Daring Fireball). 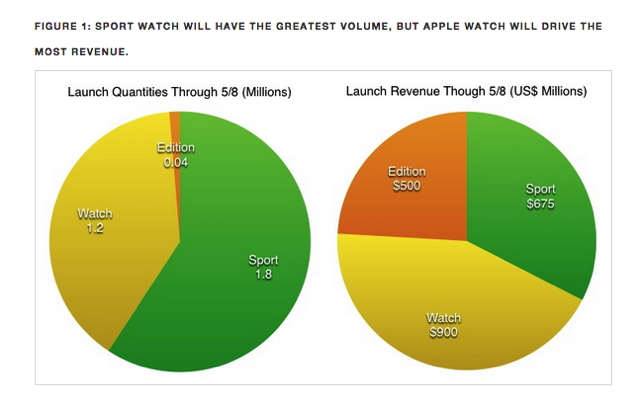 To understand the market performance of the Apple Watch, Howe set up a simple model that predicts the sale of 1.8 million Apple Watch Sport, 1.2 million Stainless Steel Watch, and 40,000 Edition models.

While I believe that these figures will be considerably below the number of pre-orders for Apple Watch, I believe Apple did this for an important reason. Apple is offering 38 different models of Apple Watch and it has no order history to go on. Instead of guessing at the right mix of models to manufacture, I believe that while Apple has manufactured a large number of Apple Watch electronics modules, it will perform the final assembly of actual products—the unique combinations of module, case, and band—to order. This approach will allow it to keep inventory costs low and satisfy as many consumers as possible.

Interestingly, the mid-tier Apple Watch model generates more revenue than the Sport model, despite lower sales numbers. Howe estimates that the Apple Watch will become the company’s most profitable product line ever, with a gross margin exceeding 60%. The reasoning is simple: All models have the same internals – the core electronics models – and while the case materials add to the total bill of materials, the costs are much lower than the premium price customers pay.