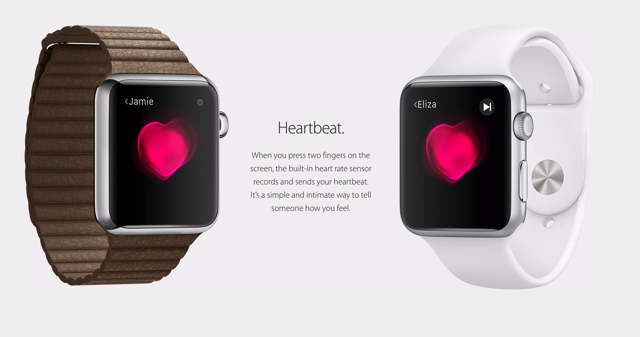 One of the key selling features of the Apple Watch was its ability to create entirely new ways of connecting. It could be the start of a whole new kind of conversation: A tap on your wrist, a surprising sketch that appears on your watch, and, the most intimate part of all, sending your heartbeat.

There is one tiny issue though: You need two to send a heartbeat, so what seemed a most appealing social feature quickly turned into the loneliest feature of the Apple Watch as many new owners found themselves alone with their devices. This doesn’t specifically mean that they are alone – it could be the awkward smile of life when you get your Apple Watch and your other half doesn’t.

Fortunately, there is a fix for that: a subrreddit for all those lonely Apple Watch owners called R/lonelyheartbeats. You need only to reveal your iMessage ID (email address), and you start getting taps and heartbeats, Wired reports.

“It started as a group of Watch buyers who didn’t know anyone else that was getting one and wanted to play with the Watch to watch heartbeats, sketches, and tap features,” redditor nooshaw tells Wired. Nooshaw started r/lonelyheartbeats as a place for solitary Watch users to share their iMessage details in order to use the device’s most intimate features.

Of course, there is always a privacy issue – you might get spammed, for example, or you might receive pics of genitals – but there is a fix for that (you can block users). And it may be worth a try if you want to test the heartbeat feature.