The world’s biggest search engine, Google, has shared its annual Year in Search video, covering various search topics. It looks as though Apple has lost some steam here in Canada this year: While the technology chart does include the company’s products, they rank much lower than last year, when the iPhone 6 took the top position.

BlackBerry, on the other hand, is back in force, thanks to its ambitious move to release a handset running Android: The BlackBerry Priv was the most searched for device in 2015, according to Google’s “Year in Search” chart.

When looking at overall searches, Google Canada says it is no surprise that the Toronto Blue Jays landed the top spot in 2015’s Year in Search ranking, dominating Canadian search queries as they have done the AL East so far this season. The Blue Jays were followed by newly elected prime minister Justin Trudeau in popularity. You can find the full list inserted below.

As for the global “Year in Search” list, Apple continued to top the technology section, as the iPhone 6s topped the list, followed by the Samsung Galaxy S6. In third and fourth places, however, we find two other Apple products, the Apple Watch and the iPad Pro, respectively. 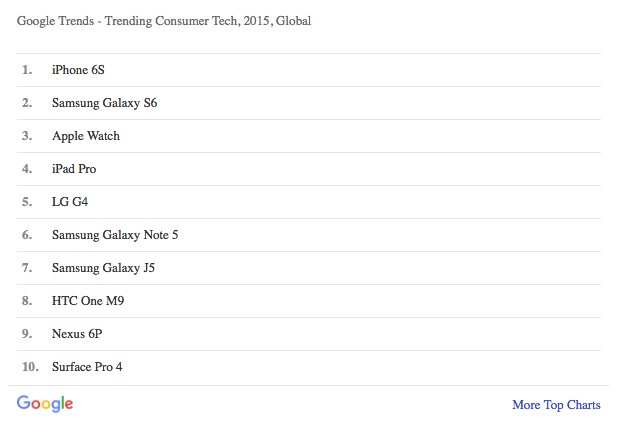