As pointed out by 9to5Mac, Apple has refreshed its Apple Watch microsite adding more details about the upcoming wearable as well as some new interactive images of the device. The ‘Features’ page on the site has now been replaced with expanded descriptions of the watch’s functions across separate pages labeled ‘Timekeeping’, ‘New Ways to Connect’, and ‘Health & Fitness’.

The new Apple Watch features pages now go more in-depth into each category with additional details and interactive images. The Timekeeping section now also shows a brief description of several faces. For example Apple describes the above watch face named ‘Simple’ as “an elegant and minimalistic view of the time — usually the first thing you want at a glance. Easily adjust the amount of detail on the dial, from light to rich. Even with complications, this face maintains a clean and symmetrical design.” 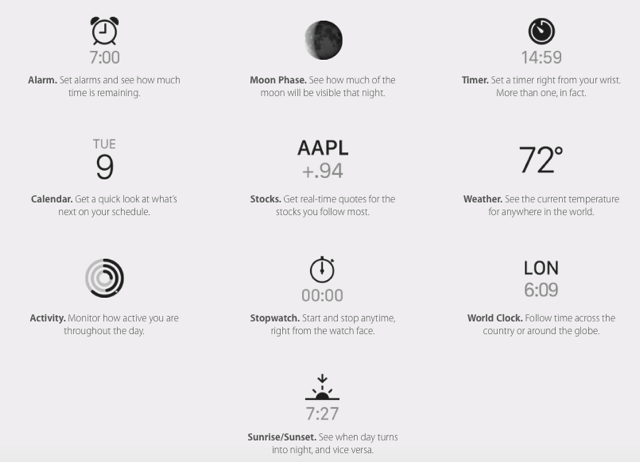 Further down the Timekeeping page, there is an interactive image of the Apple Watch’s stopwatch functionality which allows you to choose between an analog, digital, and hybrid view.

No details regarding the Apple Watch’s pricing or release date have however been released. You can check out the refreshed microsite here.