As we close out March and head into April (beware of all ‘news’ headlines tomorrow), that means we’re one step closer to the launch of Apple Watch, with pre-orders set for April 10 and the debut on April 24.

Apple has already allowed the first wave of developers to release their Apple Watch app updates to the App Store and now we have a first look at how news apps such as the New York Times and The Globe and Mail will look like on your wrist.

According to the Times, they will have “One-sentence stories, crafted specially for small screens, will provide the news at a glance across many Times sections, including Business, Politics, Science, Tech and The Arts,” as seen below:

The publication says Handoff will allow readers to continue reading stories later on their iPhone or iPad when they tap ‘Save for Later’, which will build a personal reading list. The Times says they will have editors on three continents dedicated to their mobile apps include the Apple Watch app (an extension of their iOS app) 24 hours a day.

Meanwhile, The Globe and Mail has also shared a glimpse of what their news app will look like, similarly displaying one-liner news headlines along with the same ‘Save for Later’ option, which Apple has most likely suggested developers to use, as seen in the screenshot below: 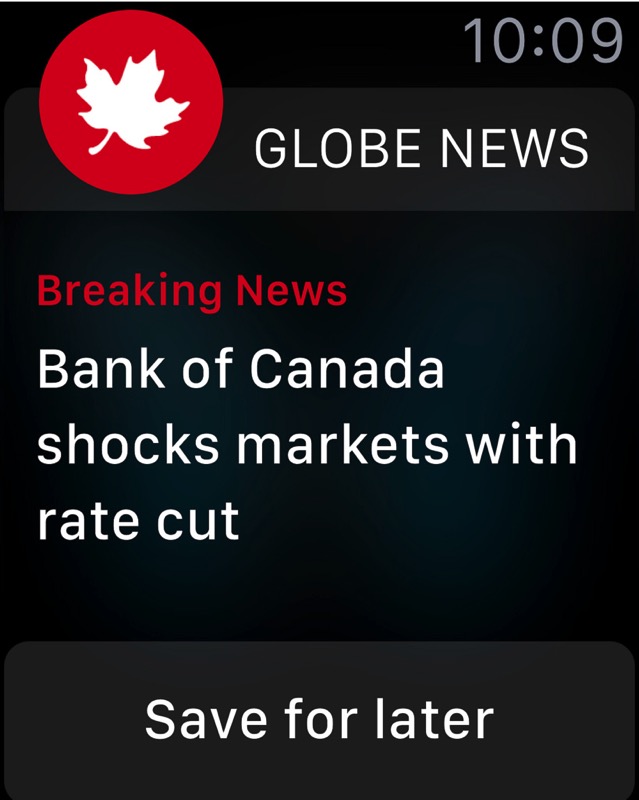 Angus Frame, Vice President of Digital Media at The Globe and Mail said in a statement “the publication is committed to delivering great journalism to Canadians in innovative ways that meet the ever-changing needs of our readers and we’re excited to extend our popular iOS app experience to Apple Watch.” (via TechVibes).