Analysts firm Netbase last week released a luxury brand report, based on 700 million social media impressions from 2014-15 of people talking about watch brands, according to which the Apple Watch has even surpassed Rolex, the world’s number one watch brand, to become the most talked about luxury watch on social media, Business Insider is reporting. 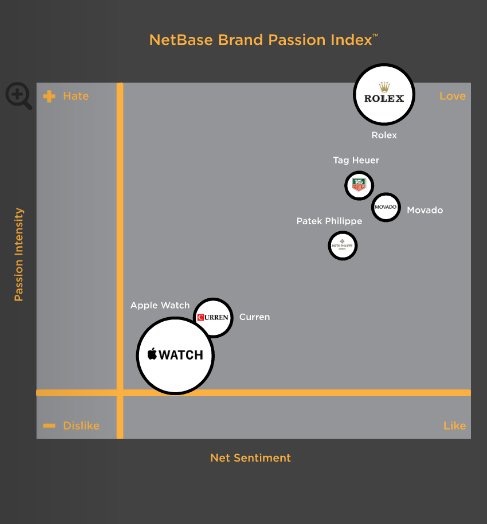 The survey has however highlighted that Apple Watch being the most talked about watch, doesn’t necessary make it is the most-liked watch as well. In fact, a “passion index” included in the survey, which measures how favourable the impressions were, showed that Rolex was the most liked while the Apple Watch was the least liked of all watch brands.

While all the brands were smack in the “love” category of the chart, the largest circle of the somewhat-controversial Apple Watch was the least liked and least intensely, while Rolex was the most liked, with the most intensity. It’s good news generally for Rolex, which has seen overall mentions of their brand raise 48%.

Netbase has also revealed that the “passion index” for watches in general has risen to 77%, with the luxury brand category at 69% on average.

SaskTel is partnering with South Saskatchewan Ready (SSR) to bring the infiNET service to four communities in Southern Saskatchewan. The partnership will expand the SaskTel infiNET service, Saskatchewan’s largest fibre broadband network, to the following communities: Bengough Coronach Rockglen Willow Bunch The project is being facilitated through SaskTel’s Community Participation Program, which has been utilized by over...
Usman Qureshi
24 mins ago

Despite engineering delays, Apple is said to be continuing work on full reverse wireless charging support for the next-generation iPhone (via 9to5Mac). (Concept image: via EverythingApplePro) Citing sources familiar with the matter, the report notes that Apple was expecting to introduce the feature with the iPhone 14 Pro, but it missed the deadline. However, the...
Usman Qureshi
36 mins ago