With Apple Watch set to begin shipping in April for the U.S., all eyes are on whether countries such as Canada will be part of the first launch.

According to Patently Apple, the Cupertino company has recently started filing Apple Watch icon trademarks around the world, in the U.S., Europe and China. More recently, Apple has filed similar trademarks but this time in Canada (and Hong Kong):

Apple has filed for 9 Apple Watch Icon Trademarks in Canada covering Passbook, Settings, Messages, Stocks, Photos, Maps, Weather, Mail, Camera Remote and the Apple Watch interface. Although they were published today, the filing dates are listed as being February 12, 2015.

Apple’s nine filings with the Canadian Intellectual Property Office—through acting agent Baker & McKenzie LLP—such as the Apple Watch Passbook icon below, was made on February 10, 2015 and formalized two days later. 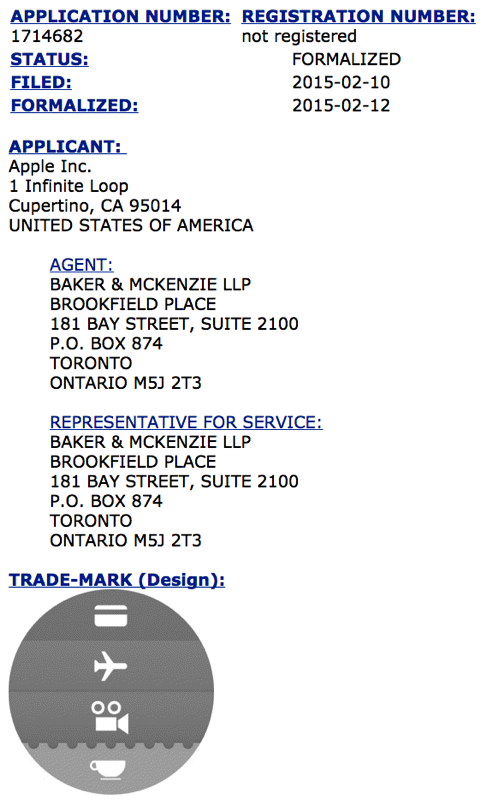 Apple’s U.S. website notes Apple Watch is “Coming in Early 2015”, while the Canadian website only says “Available in 2015”, which suggests Canada may not be part of the initial launch.

Yesterday the Wall Street Journal reported its sources say 5-6 million Apple Watch orders were made by the company, with half of those being the entry $349 USD Sport model. The watch was originally planned as a state-of-the-art health device, but was scaled down due to technical roadblocks.