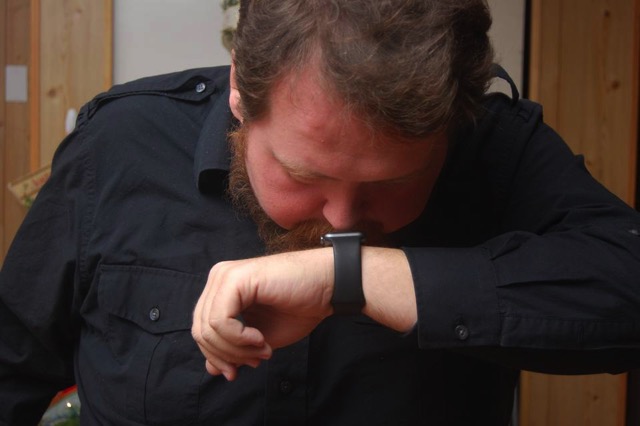 David Galloway, a technical writer from Greenville, S.C., has discovered that using the Apple Watch with your nose can be very useful, especially when your hands are occupied, The Wall Street Journal is reporting. Similarly, a manager at Freebirds World Burrito was cutting meat when the timer on his Apple Watch started buzzing and beeping. With his hands covered in meat juices, he used his nose to silence the alarm. “It definitely works. Sometimes you gotta do what you gotta do”, he told the WSJ.

Bernard Desarnauts runs Wristly, a research firm that bills itself as “The Independent Voice of Apple Watch.” A few months ago, a reader confessed to being a nose tapper and asked if Mr. Desarnauts knew others. So he included the question in an online survey.

The results: 46% of the 1,040 respondents said they had used their nose as an “input device.” Another 28% said they hadn’t tried it, but wanted to give the nose tap a shot. Residents in colder climates were more likely to say they nose tap, because they are often bundled in gloves and coats.

Apparently Mr. Desarnauts has also been trying ‘nose tapping’ with his Apple Watch, using it for the first time in the shower when his wrist started to vibrate from an incoming phone call while he had shampoo in his hands. He sent the call to voice mail hands free. “My nose was dry and I was surprised that it worked”, he said. “I was almost expecting that it wouldn’t”.

Interestingly, the manager at the burrito restaurant says that he sometimes also uses the tip of his elbow to control his Apple Watch, though he prefers his nose. He even uses his nose to press “reply” to a text message, then dictates the response into his watch.

Do you use nose or elbow tapping on your Apple Watch? Does it work for you?