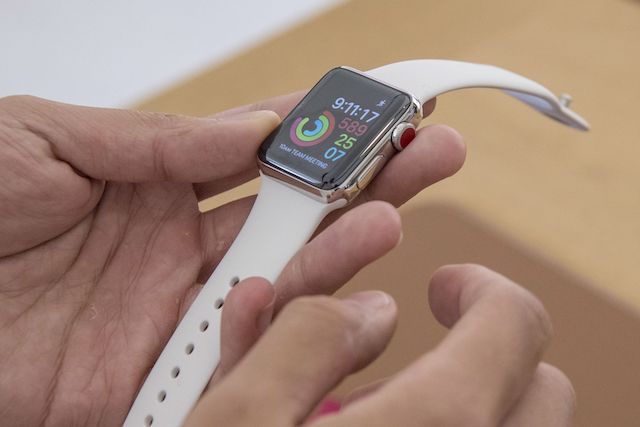 Citing people familiar with the matter, Bloomberg is claiming that Apple is developing an advanced heart-monitor for its next generation Apple Watch, as part of the company’s plans to turn its smartwatch into a serious medical device. While the current Apple Watch has a basic heart monitor, Apple wants to use advanced sensors to predict future afflictions instead of simply collecting historical data about the body.

A version being tested requires users to squeeze the frame of the Apple Watch with two fingers from the hand that’s not wearing the device, one of the people said. It then passes an imperceptible current across the person’s chest to track electrical signals in the heart and detect any abnormalities like irregular heart rates. Such conditions can increase the risk of strokes and heart failure and develop in about one-quarter of people over 40, according to the U.S. Centers for Disease Control and Prevention.

Tests like electrocardiograms or EKGs, which are are commonly performed in doctors’ offices, hospitals and ambulances, monitor the heart’s activity for short periods, limiting their ability to spot potential abnormalities. And while there are some wearable versions too, these usually track the heart continuously for a few days at most.

By adding an EKG monitor to the Apple Watch, it may become easier to predict arrhythmias as an adjunct to what is currently available. Although people familiar with Apple’s plans said that the company may still decide not to include the technology in future products.

Ethan Weiss, a cardiologist at the University of California, says that even though there is role for wearable EKG devices, there are only recommended for patients who are already displaying symptoms. “There’s no reason to follow ECG in normal, healthy people”.

Apple spokeswoman Amy Bessette declined to issue a comment on the report.