Announcing the winners of its annual Brandcameo Product Placement Awards for 2015, branding website Brandchannel has handed Apple the Award for Overall Product Placement, as its products appeared in 9 of the 35 films that topped the U.S. box office last year (via MacRumors). Meanwhile, the newly Apple-owned brand Beats, unfortunately won the 2014 Award for Worst Product Placement. 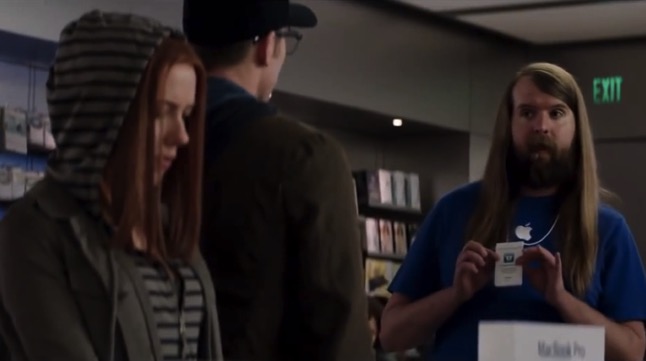 Each year, Brandchannel names the movies and brands with the most proliferation within Hollywood films over the past year. Apple last won the award in 2010 and 2011 and now, the company is back on top, besting both Coca-Cola and Sony by a single appearance, thanks to The Lego Movie in which Lord Business talks about his iPod Shuffle, though an Apple logo does not appear in the movie.

Apple’s brand cameos last year ranged from the passing mention in “The Lego Movie” to an outstanding Apple Store scene in “Captain America: Winter Soldier”. Other appearances include in “Ride Along,” “The Other Woman,” “Neighbors,” “The Fault in Our Stars,” “Think Like a Man Too,” “Gone Girl” (above, with a Starbucks latte in the other hand) and “Ouija.”

Beyond #1 films, Apple was a common sight as well in films including “Alexander and the Terrible, Horrible, No Good, Very Bad Day,” as well as “Birdman,” “Sabotage,” “Breakup Buddies” (China), “Tusk,” “Let’s Be Cops” and, especially, “Sex Tape.”

To find out all the other winners of this year’s Product Placement Awards, check out this link.