After two years, Apple won dismissal of the consumer lawsuit claiming that Siri’s voice-recognition feature does not work as advertised. The company had previously argued that the claims were too general when they filed a motion for dismissal back in 2012.

On Friday, U.S. District Court Judge Claudia Wilken turned aside the claims, which were made by four iPhone customers, alleging that Apple’s iPhone 4S advertisement had misrepresented the capabilities of the company’s personal voice assistant, Siri. 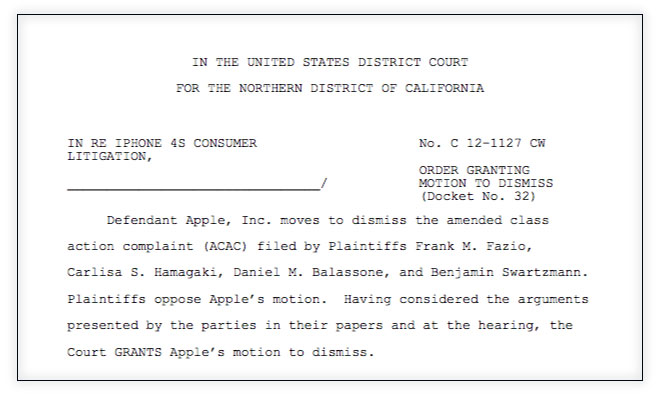 The four iPhone customers said Siri did not understand their questions or locate places that they asked about. Judge Wilken said:

“Apple made no promise that Siri would operate without fail. A reasonable consumer would understand that commercials depicting the products they are intended to promote would be unlikely to depict failed attempts.”

Apple lawyers said the plaintiffs “fail to allege any supposed misrepresentation with particularity.” During the case the plaintiffs did not say when they were “exposed to the purportedly misleading advertisements, which ones they found material, how and why they were false, or which they relied upon in purchasing their iPhones.”

The lawsuit was dismissed with prejudice, meaning the plaintiffs will not be allowed to refile the complaint.