Following yesterday’s announcement of record quarterly results, Apple’s stock has seen a massive surge to reach a high of $421.22 per share, helping the iPhone maker surpass Saudi Aramco to become the world’s most valuable publicly listed company (via VentureBeat). 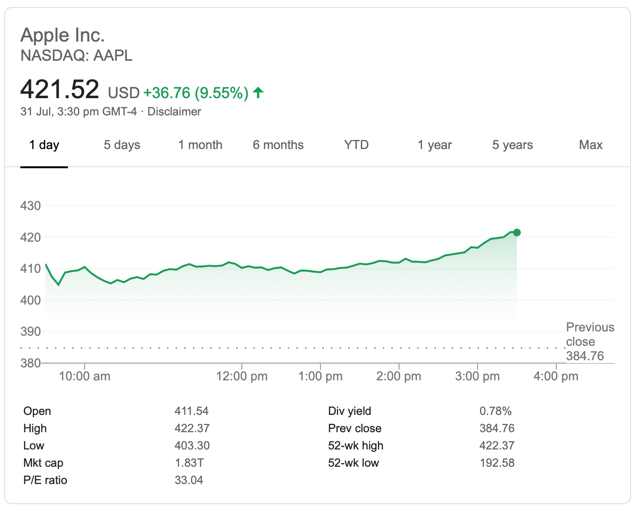 According to the share count provided by Apple in a regulatory filing today, Apple’s market capitalization currently stands at $1.83 trillion. As of its last close, Saudi Aramco, which has been the most valuable publicly listed company since going public last year, had a market capitalization of $1.760 trillion.

With Friday’s stock gain, Apple has surged about 40% year to date, with investors betting it will emerge from the COVID-19 pandemic stronger than smaller rivals.

“In uncertain times, this performance is a testament to the important role our products play in our customers’ lives and to Apple’s relentless innovation,” said Tim Cook.

“This is a challenging moment for our communities, and, from Apple’s new $100 million Racial Equity and Justice Initiative to a new commitment to be carbon neutral by 2030, we’re living the principle that what we make and do should create opportunity and leave the world better than we found it.”

Apple also announced a four-for-one stock split in its quarterly report, “to make the stock more accessible to a broader base of investors.”