According to a recent report published by MIDiA Research exploring the global headphone marketplace, Apple has surpassed Sony to become the world’s leading headphone maker with a 24% market share (via MacDailyNews). Sony is now second with 22% share, followed by Panasonic and Bose in third and fourth spots respectively. 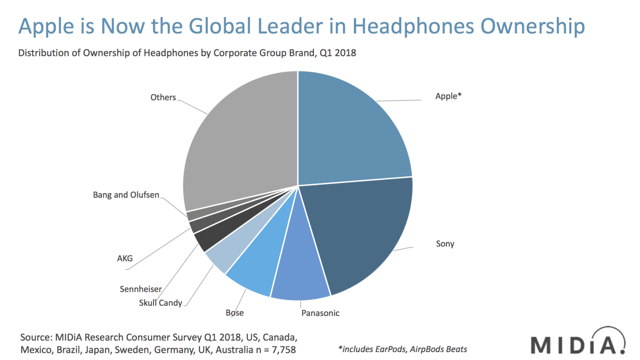 The study shows that only 30% of consumers do not have a pair of headphones, and smartphone listening is the second most widespread way of listening to music behind the car. The research also found that the top four corporate-level headphone manufacturers represent 61% of the global headphone market share.

“Without headphones, streaming music would not have the biggest driver of subscriber adoption: smartphone listening. Back in the peak of the Walkman era of portable audio, headphone listening was still a comparative niche activity and skewed heavily towards younger consumers.

Just as Apple stole Sony’s leading position in portable audio players, it is now doing the same with headphones.”

Apple’s market share comprises of the three headphone brand categories combined i.e, EarPods, AirPods, and Beats. Another interesting finding from the report is that Apple is the only top 20 headphone brand whose owners are not majority male.