Four. More. Days. That’s right, WWDC 2009 kicks off next Monday and just yesterday the first photos have appeared online from Moscone West. Taken by Adam Jackson, one of the main banners highlights the following text: “One year later. Light-years ahead.” 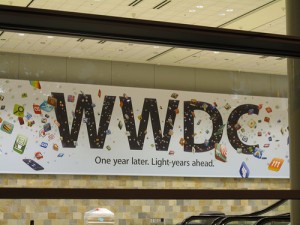 Whether you want to buy into Apple’s marketing or not, you have to give credit where credit is due. The App Store has surpassed 1 billion downloads in less than a year, which is pretty remarkable. Can you try to think of any other mobile download store that even comes close–you can’t. RIM, Nokia, Palm, and Android are far behind Apple in the application development/download arena.

When WWDC kicks off on Monday with a keynote by Phil Schiller, I can only imagine what surprises Apple will have in store for us, aside from finally getting our hands on iPhone OS 3.0 firmware. Surprise appearance by Steve Jobs anyone?

More pictures can be seen here.