AppleCare+ Prices for Apple Watch Leak, Said to Start from $59 to $999

Alleged internal Apple screenshots obtained by both MacRumors and 9to5Mac reveal how much Apple will charge if you choose AppleCare+, the extended support for the highly anticipated Apple Watch. 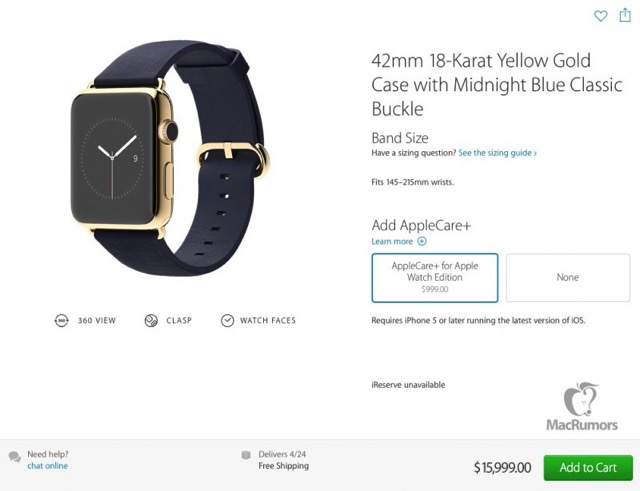 As the document reveals, AppleCare+ will cost $999 (USD) for the high-end Apple Watch Edition, $79 for the mid-range Apple Watch, and $59 for the entry-level Apple Watch Sport. The support is apparently priced according to the models’ pricing, but the question of whether the band choice will affect the AppleCare+ pricing remained unanswered.

So what do you get for this price? For the Apple Watch Sport and the stainless steel models, you’ll get a two-year warranty for hardware repairs, and you’ll be covered in case of accidental damages. For $999, however, you’ll get a three-year warranty, 24/7 support, and a special setup hotline.

Those after an Apple Watch will be able to purchase this add-on online or in store, although the sources didn’t reveal how much time you have to decide after the purchase. With the iPhone, however, you can buy AppleCare within 60 days, so we expect a similar time frame.

The Apple Watch will be available for pre-order on April 10, and customers will be able to try it on by visiting an Apple Store starting that day. The device will ship on April 24.