AppleCare+ Now Available in Canada for the iPhone for $99 [Update]

Earlier, we confirmed that AppleCare+ was available for the new iPad for Canadians, but it is now also supported for iPhones. Apple updated their website today to reflect the changes. Here’s how they describe AppleCare+:

Every iPhone comes with one year of hardware repair coverage through its limited warranty and up to 90 days of complimentary support. AppleCare+ for iPhone extends your coverage to two years from the original purchase date of your iPhone1 and adds up to two incidents of accidental damage coverage, each subject to a $49 service fee.2 Whether you use your iPhone with a Mac or a PC, just one phone call can help resolve most issues. 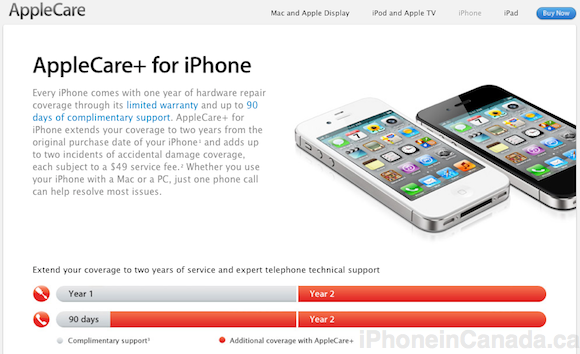 So there is a maximum of two incidents with AppleCare+, with a deductible of $49 each time. Also, AppleCare+ must be purchased within 30 days of your iPhone purchase, which will be $99.

Most people swear by the no-questions-asked rock solid guarantee of AppleCare whenever their iPhone runs into trouble, whether it’s an accidental drop or not.

Let us know if you’re going to jump on this the next time around, or if AppleCare has saved you before.

Update 1: What about those that normally have up to 1 year to buy AppleCare for their iPhones? Here’s what Apple customer support told @i0livier, when he asked the same question but referred to the iPad 2; we can assume it’d also apply to the iPhone:

“AppleCare+ will be available for customers who have purchased a new iPad or the iPad 2 within the last 30 days.

For previous buyers, they will be able to get the $79 AppleCare simply [and only] by ordering over the phone with AppleCare. [No Retail Apple Care sales]

If you bought an iPad2 in the last 30 days, you would have to pick the new 99$ AppleCare+ unless you really want to call AppleCare directly”