Apple has announced October 25th as the date for its 2012 Q4 conference call, set to take place at the regular time of 2PM PST: 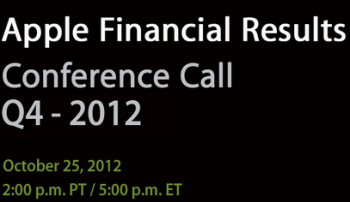 During Apple’s 2012 Q3 conference call in July, the company announced $35 billion dollars in revenue,  selling 17 million iPads and 26 million iPhones during that quarter. As for expectations in the fourth quarter, here were Apple’s projections from the Q3 earnings call transcript:

Apple’s Q4 quarter concluded at the end of September and will include numbers from iPhone 5 pre-orders and launch sales, which topped 5 million over the opening weekend.

With a $4.28 billion operating loss in Q4, Meta's Reality Labs division recorded a total loss of $13.7 billion in 2022, the company said in its earnings report (via CNBC). Back in 2021, CEO Mark Zuckerberg said Meta's future would be in the metaverse, a digital universe where people will work, shop, play, and learn....
Usman Qureshi
4 mins ago

Apple’s all-new HomePod 2 is launching tomorrow, February 3, 2023, with some early hands-on reviews and unboxing videos already hitting the web. Just ahead of the official release, Matthew Costello, Apple’s hardware vice president, has shared how Apple decided to resurrect a product it had discontinued in 2021. We deeply studied the learnings from the first HomePod...
Usman Qureshi
21 mins ago

Sony has today announced the release of its next PS5 system software beta, which introduces a handful of new features, including the highly requested Discord voice chat. The release introduces a variety of UX, accessibility, and social feature enhancements, as well as Variable Refresh Rate (VRR) support for 1440p resolution. Invited beta participants from the...
Usman Qureshi
46 mins ago