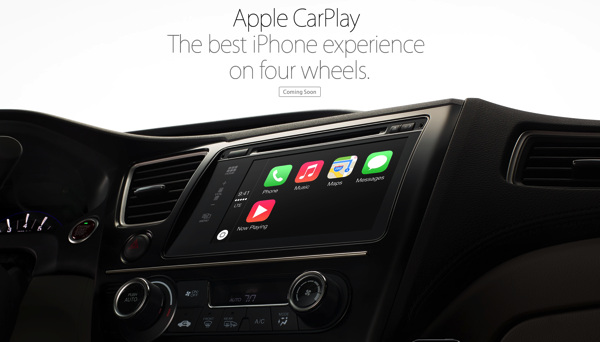 Less than one week after being announced, Apple’s CarPlay is starting to raise concerns among many automotive safety experts. The new service from Apple, which was shown off for the first time earlier this week at the Geneva Auto Show, allows iPhone users to control various aspects of their phone, including calls, messages, and maps, directly from the car’s in-dash displays or using Siri-based voice inputs.

“We’re very, very concerned about it. The auto industry and the consumer electronics industry are really in an arms race to see how we can enable drivers to do stuff other than driving.”

In January, Google announced a similar in-car system, which is set to bring Android into the car later this year through partnerships with various car manufacturers, like Audi.

Apple and Google have both said their respective systems are designed to allow drivers to keep their eyes on the road, therefore increasing driver safety. In a statement Apple vice president of iPhone and iOS product marketing Greg Joswiak said:

“IPhone users always want their content at their fingertips and CarPlay lets drivers use their iPhone in the car with minimized distraction.”

Some evidence has suggested that using Siri or some other hands-free mode of operating your smartphone is just as dangerous as holding the device while driving. The problem is called “cognitive distraction,” which means that even though a driver has his eyes on the road, their mind is focused on something else.

Manager of research and communications at the AAA Foundation for Traffic Safety Bruce Hamilton said:

“The idea that people want to be on their phones, and therefore let’s give them a way to do that — that’s not putting safety first, that’s putting convenience and the desire to be in touch first.”

It is important to remember that drivers using cell phones only represent a portion of distracted driving. Eating, drinking, reading, and putting on your makeup will also distract you from focusing on the road, but there are no laws against doing most of those tasks while driving. Certain U.S. states and Canadian provinces have ban the use of cell phones while driving, however there are currently no restrictions on using the device in a hands-free mode.

“Ten years ago, the institute predicted that we would see a spike in crashes as phones and other electronic devices proliferated, but it didn’t happen. That doesn’t mean they’re not distracting, but if you think about distraction in all its different forms, cell phone use is just one part of it.”

CarPlay is set to debut in vehicles from Ferrari, Volvo, and Mercedes-Benz later this year, with a number of other major car manufacturers set to offer CarPlay down the road.