The latest brand power survey in the U.S. carried out by Tenet Partners has revealed that Apple is the fastest growing technology company in the region. “Apple is one of the fastest-rising brands among the companies tracked in the index”, said the analysts.

The Cupertino tech giant is not only ranked for a second consecutive year as the fifth most powerful brand in the U.S., but also the the top ranked technology company, beating Microsoft, Google and Sony (via AppleInsider). 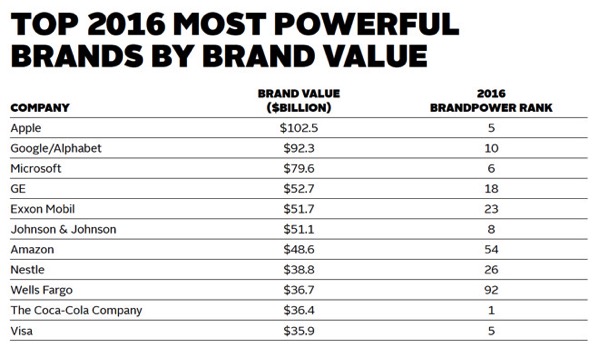 The Tenet Partners U.S. CoreBrand Index is compiled annually, providing examination of awareness and brand perceptions amongst U.S. marketplace participants. Rankings are based on brand familiarity and favorability. The favorability ranking spans reputation, perception of management, and investment potential.

The survey notes that despite the iPhone sales figure decrease in April, Apple’s reputation and awareness of the brand was bolstered by its early May investment into Chinese ride sharing service DiDi Chuxing, and success of Apple Pay in China. Five years ago, Apple ranked 44th on the survey.

Apple is only led on the overall index by Walt Disney, Bayer, Hershey, and Coca-Cola. Microsoft climbed one position in the index to sixth place, with Google/Alphabet climbing five places on the charts to reach tenth place this year.

Interestingly, every tech firm in the survey’s top 100 has shown large growth in overall brand power this year, too.