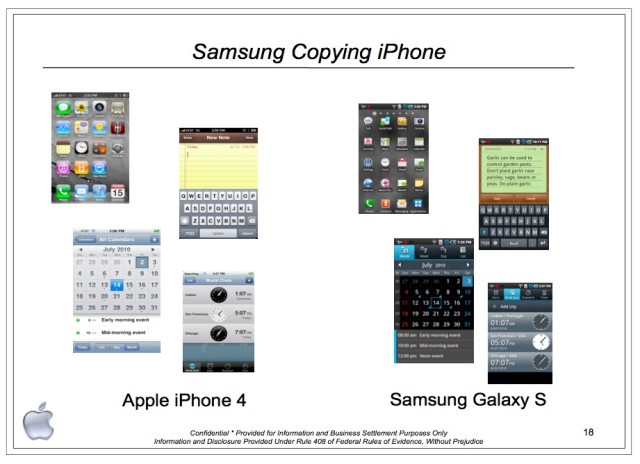 Apple had its turn in court today to give its closing statements to the jury in what will go down as one of the most high profile tech trials of the decade. CNET reports Apple focused on a couple key areas: Samsung’s ‘copy cat’ documents (which are downright hilarious) and their lacking witness list.

“Witnesses can be mistaken. They can be mistaken in good faith,” McElhinny said. “Exhibits that are created in a trial are always created with a purpose. They can confuse, and can mislead. Historical documents are almost always where the truth lies.”

“They sat with the iPhone and went feature by feature, copying it to the smallest detail,” McElhinny said. “In those critical three months, Samsung was able to copy and incorporate the core part of Apple’s four-year investment without taking any of the risks, because they were copying the world’s most successful product.”

The one closing argument that probably will hit Samsung the hardest was their lack of influential witnesses. McElhinny emphasized how Phil Schiller and Scott Forstall, two top Apple executives, were willing to be cross examined in court. Samsung executives, on the other hand, did not even bother flying in from South Korea to “answer questions under oath.”

Earlier this morning trial proceedings began with the lengthy reading of 109 page length ‘jury instructions’. Judge Judy Koh wanted everyone to be awake during these readings and asked jurors to “stay conscious” including herself, and noted they would all stand up regularly “just to make sure we’re all alive.”

Samsung has their closing statements upcoming, and will attempt to convince the jury Apple’s iOS devices infringed on their patents.

This trial is too good. So much fun watching from the sidelines. Who’s going to win this case? Apple or Samsung?