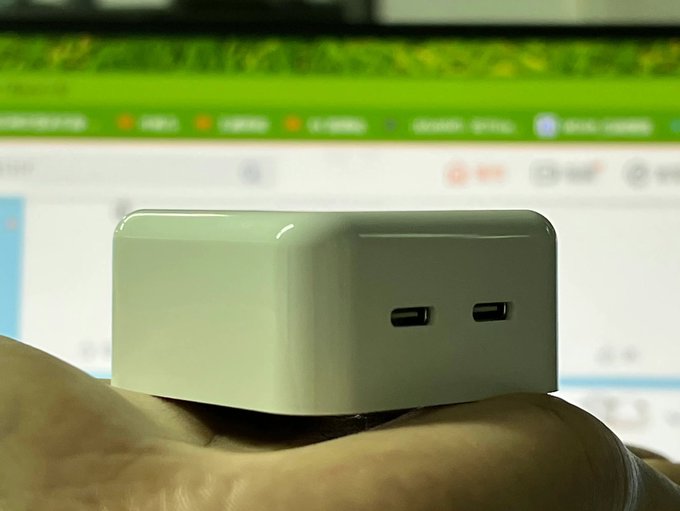 Earlier today we saw renders of what appeared to be Apple’s upcoming dual 35W USB-C charger, but now we have a picture of what it may look like in the wild.

A picture of what claims to be Apple’s 35W dual USB-C charger was shared by leaker Majin Bu (@MajinBuOfficial) on Tuesday.

We see a dual USB-C charger brick similar to the previous renders, but we do not get a view of the folding electrical prong. The finish of the charging brick is glossy, similar to existing Apple chargers.

It’s unclear when Apple will launch this dual USB-C charger, but it may debut sometime around WWDC or in time for this fall’s expected iPhone 14 launch. News of the charger leaked when an Apple support document was published to the web prematurely and spotted by 9to5Mac.

You can bet it’s going to come with Apple pricing, and in the meantime, some alternatives can be found on Amazon, such as this Anker dual USB-C charger for $47.99 with 40W max total output (or 20W max per port, says Anker).

Following the release of iOS 16.2, Apple has limited the “Everyone” option in AirDrop to 10 minutes on iPhones for everyone, after which the receiving setting automatically reverts back to “Contacts Only” (via TechCrunch). Last month, Apple rolled out this restriction after applying the iOS 16.1.1 update exclusively in China, noting that the feature improves...
Usman Qureshi
5 mins ago

Apple has today highlighted how the company and its employees support organizations and communities around the world through volunteering, donations, and learning programs. Since its inception 11 years ago, Apple’s Employee Giving program has raised over $880 million dollars for almost 44,000 organizations globally. That includes the work of more than 76,000 employees who have...
Usman Qureshi
40 mins ago