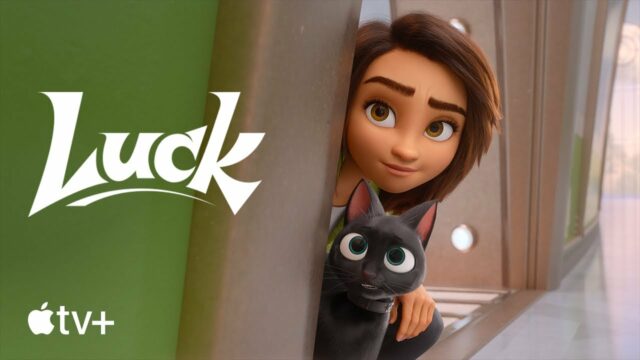 Apple has debuted its first animated film Luck on Apple TV+. The film has been garnering a lot of marketing and push from Apple in the lead-up as this marks a new era for Apple’s original content.

Apple Original Films partnered with Skydance Animation to develop Luck. The film revolves around Sam Greenfield, a generally unlucky person. Sam finds her way into the “Land of Luck,” where she meets an assortment of magical creatures. With the assistance of a black cat named Bob, the two team up on a quest to get Sam back home and perhaps change her luck on the way.

Luck stars Eva Noblezada as Sam, and Simon Pegg as Bob. Jane Fonda, Whoopi Goldberg, Flula Borg, Lil Rel Howery, Colin O’Donoghue, John Ratzenberger, and Adelynn Spoon are all credited in the film as well in supporting roles. The film is directed by Peggy Holmes, who has worked on animated projects in the past such as Mickey’s Twice Upon a Christmas. Kiel Murray, Jonathan Aibel, and Glenn Berger are attached as writers for Luck.

Apple and Skydance Animation have an ongoing partnership to bring content to the streaming service. Alongside Luck, titles such as Spellbound and animated series The Search for WondLa are due to arrive on Apple TV+. The controversial former Pixar executive John Lasseter joined Skydance in 2019 as head of the studio’s animation division. Lasseter resigned from Pixar in 2018 at the height of the #MeToo movement.

Although Apple already supports some animated titles, Luck is the first major animated film on the streaming service.