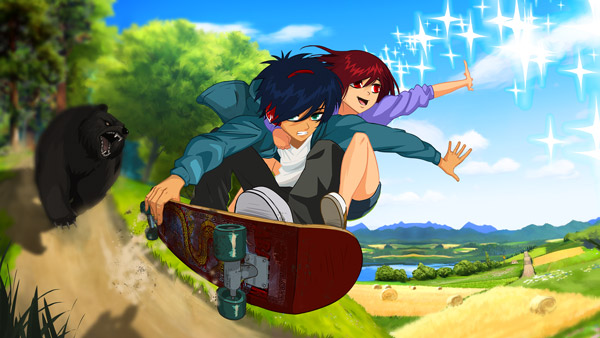 Lost in Harmony by Digixart Entertainment is Apple’s free app of the week. The game normally retails for $5.49 and is free for this week only.

The game is a musical runner that allows users to dive into a story created by six of the world’s most famous composers. Go beyond by creating and sharing your own dreams on any song with the included level editor.

It’s a stage-based auto-runner, but instead of your character running into the screen, he’s skateboarding out of it. It’s also a rhythm game, and perhaps it’s more of that than it is a runner. Obstacles are timed to go along with the music, and you’ll occasionally have to tap or swipe marks that appear.

Here is a full list of in game features:

– DISCOVER the musical story from the content director of Valiant Hearts
– Guide Kaito and Aya through their adventures, in total harmony with music
– Travel trough 30+ painted environments
– Experience music in a new way with the combination of rhythmic tapping and choreographic runner
– Customize your character’s clothes, headphones, hat and skateboard
– 3D TOUCH support
– Choose any track from your device, import it from iTunes or stream it from SoundCloud
– CREATE your own levels using the included level editor
– Share your levels and compete with your friends for the best score
– Join the worldwide Community and play an infinite choice of tracks from music lovers
– Select your landscape among beautiful artworks
– Play with your favorite character
– Easily record and publish videos of your gaming session with Everyplay

Lost in Harmony is available as a free download (normally $5.49) from the App Store. The game requires any iOS device running iOS 9.1 or later. The app contains in-app purchases ranging between $1.39 and $2.79.