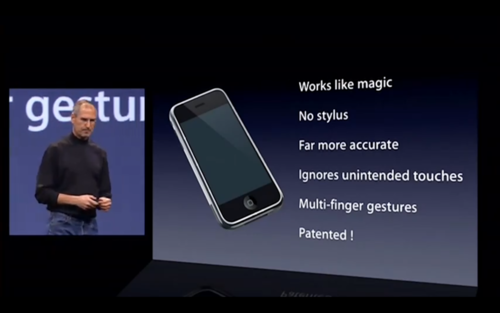 A German court has decided that an early Apple photo-management patent is invalid. This came from evidence in a video in which the original iPhone was announced in 2007 by Steve Jobs.

Apple has won injunctions against companies like Samsung and Motorola who were using its patents in different European jurisdictions, according to patent blogger Florian Mueller, who observed the proceedings in Germany on Thursday.

The problem was when Apple disclosed the bounce-back effect in the photos app in 2007. The priority date of the German patent was June 2007, five months after Steve gave the demonstration.

Effectively, Jobs killed his own company’s patent by showing off the feature before asking the German patent office for protection.

On the other hand, if this would have happened in the US, it would have been no problem because inventors had a 12-month grace period to file for a patent after making their invention.

In the 2007 demo of the original iPhone Jobs listed the iPhone’s multitouch features and then famously said: “And boy, have we patented it!” While this statement may have been true in the US, it was less true abroad.

Below is the full video of the original iPhone keynote delivered by Steve Jobs in 2007.